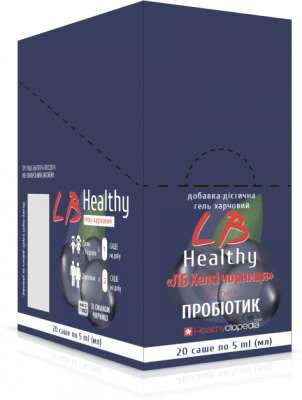 The bioactive complex of probiotics and vitamins is designed to support the immune system and balance the gut microbiota in adults and children.

Probiotic lactic acid bacteria (lactobacilli, bifidobacteria). Due to their ability to acidify the environment, lactic and bifidobacteria inhibit the growth of opportunistic and pathogenic bacteria and create optimal conditions for the action of digestive enzymes, improving digestion. Synthesize vitamins K, B1, B2, B6, B12, are involved in the process of metabolism of bile pigments and bile acids. They prevent the adhesion (attachment) of pathogens to the intestinal wall and produce bacteriocins - substances that have antibacterial activity. One of the most important functions of lactobacilli is to participate in the formation of systemic and local immune resistance (resistance) of the host organism. This is due to the universal immunomodulatory properties of lactobacilli to form associations with the intestinal mucosa and to interact with epithelial and immunocompetent cells, as well as with M-cells of Peyer's plaques, which are clusters of lymphoid tissue. By activating the mechanisms of humoral and cell-mediated immune responses, lactobacilli stimulate the immune system, the functions of the reticulo-endothelial system of the intestinal tract and the production of a number of cytokines (cell regulators of the process of formation of immunity). Lactobacilli activate the proliferation (multiplication) and differentiation (ability to perform a role) of immunocompetent cells; lead to the induction of local and systemic immunoglobulin production.

Recent studies have shown that members of the genus Lactobacillus are involved in the formation of the phenomenon of "oral tolerance" to food antigens, that is, help the body in the fight against allergies caused by food. Lactobacilli also stimulate the contractile function of the intestine, promoting digestion and elimination of "waste". The sour taste "includes" unconditional food reflexes, such as activation of secretory function.

Vitamin B1 (thiamine) - involved in carbohydrate metabolism and related energy, fat, protein, water-salt metabolism, has a regulatory effect on the trophic and nervous system activity required for acetylcholine synthesis. Improves blood circulation and is involved in blood formation. Optimizes cognitive activity and brain function. It has a positive effect on energy levels, growth, normal appetite, learning ability and is required for muscle tone of the digestive tract, stomach and heart. It acts as an antioxidant, protecting the body from the destructive effects of aging, alcohol and tobacco.

Vitamin B6 (pyridoxine) - plays an important role in the metabolism required for the normal functioning of the central and peripheral nervous system, participates in the synthesis of neurotransmitters, proteins, enzymes, hemoglobin, prostaglandins, metabolism of serotonin, catecholamines, glutaminophen, glutaminophen the use of unsaturated fatty acids, lowers cholesterol and lipids in the blood, improves myocardial contractility, promotes the conversion of folic acid to its active form.

Vitamin B12 (cyanocobalamin) - has a pronounced lipotropic action, regulates the function of blood-forming organs, prevents fatty infiltration of the liver, increases oxygen consumption by cells in acute and chronic hypoxia. Enhancing the synthesis and ability to accumulate protein in the body, has an anabolic effect. Increasing the phagocytic activity of leukocytes and activating the activity of the reticuloendothelial system, enhances immunity. Low levels of cyanocobalamin twice accelerate the development of the disease in people with AIDS.

Vitamin D3 - formed in human skin cells under the influence of UV rays. Necessary for the functioning of the parathyroid gut, intestines, kidneys and bone system. It plays an important role in the absorption of calcium and phosphate in the intestine, the transport of mineral salts and the process of calcification of the bones, regulates the excretion of calcium and phosphate by the kidneys. The concentration of calcium ions is important in maintaining the tone of the skeletal muscle, in conducting nervous excitation, in the process of blood coagulation. Vitamin D3 is necessary for the normal functioning of the immune system. Vitamin D3 deficiency in food, decreased absorption, calcium deficiency, and lack of adequate insolation in the period of intensive child growth lead to the development of rickets in young children and impaired tooth enamel formation, in adults - to osteomalacia, during pregnancy. before the onset of tetanium symptoms. Menopausal women with osteoporosis due to hormonal disorders should receive a sufficient dose of vitamin D3.

Dietary Supplement "Food Gel" LB Healthy Blueberries"can be recommended as an additional source of a complex of biologically active substances - probiotic lactic acid bacteria (lactobacilli, bifidobacteria), vitamins D3, B1, B6, B12, which have a positive effect on gut microbiocenosis intestines, in order to create optimal nutritional conditions for the normal functioning of the digestive system and for the overall strengthening of the body.

The active substances of the drug may be recommended:

Period of use: 3 weeks, further acceptance by agreement with the doctor.

Do not exceed the recommended daily dose!

Usage Cautions: Individual sensitivity to product components. Consultation with a physician is recommended before use. It is not recommended to use concurrently with the vitamins contained in the gel.

Storage conditions: Store in the manufacturer's packaging at temperatures from 00C to + 250C and relative humidity of not more than 75%.

Precautions: Keep out of reach of children. Do not use if the protective film is damaged.

Shelf life: 24 months from the date of manufacture. After opening the package, refrigerate for no longer than three months.

It is not a medicine.

The lot number coincides with the production date. The date of production is indicated on the packaging. 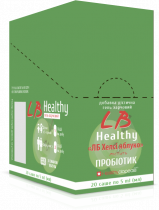 Probiozy.me (Пробиозим)
594,00 UAH
0,00
Subscribe to news
Get only useful links and news about our discounts! We do not deal with spamming!
We Accept