To strengthen the vessels №30 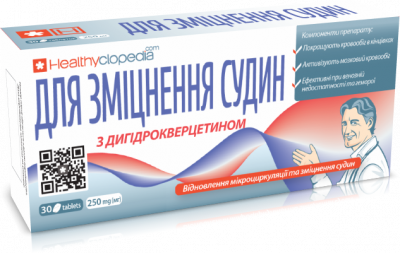 Recovery of microcirculation and strengthening of vessels

Bioactive Complex "For Strengthening Vasks" is a complex of components for daily care of blood vessels and heart that never rest. High activity of the drug due to the presence of a complex of vitamins, bioflavonoid and herbal extract, with pronounced antioxidant, regenerating, capillary-protective, anti-edematous, detoxification and radioprotective effects. The components of the drug eliminate the dilatation of veins and venostasis, reduce the permeability of capillaries and increase their resistance, improve lymphatic drainage, increasing lymphatic outflow.

Dihydroquercetin is a natural bioflavonoid isolated from Siberian larch. Stimulates synthesis and stabilizes the structure of collagen fibers in vessels, inhibits the destructive effects of the hyaluronidase enzyme on the vascular wall, thereby contributing to increased strength and elasticity of blood vessels and capillaries. Dihydroquercetin reduces blood viscosity, restores microcirculation, making fabrics "alive".
It has antifungal and bactericidal properties, promotes fast extinction of inflammatory processes in vessels. It inhibits the lipid oxidation of the cell membranes (antioxidant effect), preventing the development of various diseases and premature aging of the cells of the body. Dihydroquercetin is a natural hepatoprotector due to binding and removal from the body of toxic substances and products of metabolism. The gastroprotective effect is due to the regeneration of the mucous membrane, the prevention of the appearance of ulcers. Dihydroquercetin has a pronounced rejuvenating effect, as it normalises in the skin the synthesis of elastin and collagen.

Extract Ginkgo biloba. The active substances of the extract are flavonoids, ginkgoids and white halibut. They expand blood vessels, improve blood flow, inhibit red blood cell counts (anti-sludge effect), suppress the action of the platelet aggregation factor (anti-PAF effect) and, by regulating metabolism, protect cells and tissues from damage caused by hypoxia.
Extract Ginkgo biloba improves cerebral circulation and supply of the brain with oxygen and glucose (antihypoxic action), prevents mental impairment. Has vasorrhagic effect on the entire vascular system: arteries, veins, capillaries. Prevents formation of free radicals and peroxide oxidation of lipids in cell membranes (antioxidant effect). It has a pronounced anti-edema effect both at the level of the brain and on the periphery. Affects the release, re-absorption and catabolism of neurotransmitters (norepinephrine, dopamine, acetylcholine) and their ability to bind to membrane receptors. Creates conditions for maintaining and restoring memory and cognitive (cognitive) functions, hearing and vision with age changes.

Nicotinic acid (vitamin PP, vitamin B3) - a vitamin that is involved in many oxidative-reduction reactions, energy metabolism, the formation of enzymes and the metabolism of lipids and carbohydrates in cells. Extends small blood vessels (including the brain), improves microcirculation, has a weak anticoagulant effect, increasing fibrinolytic activity of blood (thins blood). Reduces the concentration of total cholesterol (antiatherosclerotic action). Possesses detoxification properties. Participates in the regulation of the synthesis and replication of DNA (cell retention).

Vitamin B6 (pyridoxine) controls the work of about 60 enzymes, participates in the synthesis of hemoglobin, neurotransmitters (serotonin, adrenaline, norepinephrine, dopamine), which play an important role in vascular inertia. Pyridoxine is involved in the production of energy, in the exchange of fats, carbohydrates, amino acids, assimilation of proteins, thereby ensuring the normal functioning of blood vessels.

May be recommended for prevention and as an auxiliary in complex therapy:
- with violations of peripheral circulation in the limbs (feeling cold and burning in the lower extremities, pain in walking, numbness, convulsions of the lower extremities), including arteriopathy of the lower extremities, Raynaud's syndrome;
- with veno-limb deficiency of the lower extremities (swelling, pain, heaviness in the legs), hemorrhoids;
- with violations of the cerebral circulation (dyscirculatory encephalopathy), which manifests itself as a deterioration of memory and mental abilities, confinement and anxiety, sleep disturbance;
- with neurosensory disturbances (dizziness, ringing in the ears, hypopoacusis, old-fashioned macular degeneration, diabetic retinopathy and polyneuropathy);
- in asthenic conditions: psychogenic, neurotic depression and due to traumatic brain damage.

Recommendations for consumption (use): It can be used in diets for dietary supplementation as an additional source of biologically active substances and vitamins (nicotinic acid, vitamin B6) in order to create optimal dietary conditions for the normal functioning of the heart-criminally system. Before using, the doctor's advice is recommended.

How to use: for adults - 1 tablet 3 times a day during meals. Do not exceed the recommended daily dose!

Term of use: 1 month. Further use of the term should be agreed with the doctor.

Storage conditions: Store at a temperature from + 5 ° C to + 25 ° C, with a relative humidity of not more than 75%, in the original closed package, in a dry, inaccessible place for children. Do not expose the packaging directly to direct sunlight during storage.