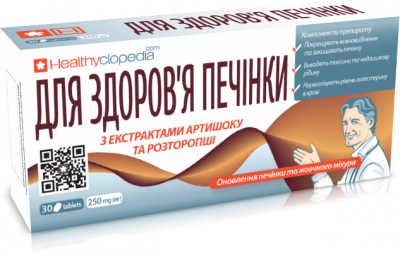 It can be recommended for prevention and as an auxiliary in complex therapy:

✅ for functional dyspepsia, dyskinesia of the biliary tract in a hypokinetic type;

✅ in case of digestion after consumption of fatty and hard-blooded food, cholestasis;

✅ with constipation due to atony of the intestine;

✅ for the purpose of detoxification (removal of excess fluid from the body, urea, toxins, including salts of heavy metals, nitro compounds, etc.);

✅ in the complex therapy of obesity;

✅ for the prevention of diseases of the digestive system.


The plant "For the health of the liver" is designed as an additional source of biologically active substances for daily maintenance of the function of the organs of the gastrointestinal tract and prevention of disorders of the digestive system. The components of the drug stimulate bile secretion, lower cholesterol levels in the blood, stimulate hepatocyte regeneration, and diuretic and hypolipidemic effects.

Detect anti-inflammatory properties, promote the removal of toxins and excess fluid from the body. High activity of the drug due to the presence of the most significant for digestive organs of plant extracts, which determine the complex positive effect.

Sequivirpene lactones (cynopropicon) stimulate gastric secretion. The caffeine acid has a hepatoprotective effect. The artichoke gently stimulates the production of bile for a long time, which prevents stagnation of bile in the bile ducts and enhances the secretion of pancreatic enzymes. It has a diuretic effect, increases the synthesis of coenzymes in hepatocytes, normalizes metabolism, lipids and cholesterol (hypolipidemic action). Artichoke is capable of protecting the liver parenchyma in the use of hepatotoxic drugs, including antibiotic therapy. Reduces the feeling of overflow or stretching of the stomach, eliminates spasm. Ascorbic acid, carotene, B vitamins and inulin have improved metabolism. Artichoke promotes the excretion of urea from the body, creatinine, as well as toxins (including nitro compounds, alkaloids, salts of heavy metals).

Rhizome extract contains silymarin - a group of flavonoid compounds, including silibinin, silidianin and silicrystin. Silymarin protects hepatocytes from the action of hepatotoxic agents, prevents the destruction of cell membranes. Improves cellular metabolism, has hepatoprotective effect in acute and chronic intoxication and antioxidant action due to binding of free radicals in the liver tissue, has membrane-stabilizing activity, stimulates the synthesis of protein, promotes the regeneration of hepatocytes.

Recommendations for consumption (use): can be used in diets for dietary supplementation as an additional source of biologically active substances in order to create optimal dietary conditions for the normal functioning of the digestive system and optimization of metabolism, liver function and gall bladder. Before using, the doctor's advice is recommended.

How to use: for adults - 2 tablets 2-3 times a day for 15-20 minutes before eating. Do not exceed the recommended daily dose!

Term of use: 1 month. Further use of the term should be agreed with the doctor.

Storage conditions: Store at a temperature from + 5 ° C to + 25 ° C, with a relative humidity of not more than 75%, in the original closed package, in a dry, inaccessible place for children. Do not expose the packaging directly to direct sunlight during storage.

The batch number coincides with the production date. Date of manufacture indicated on the package.

Liverton No. 30 capsules for the liver
129,00 UAH
0,00
Subscribe to news
Get only useful links and news about our discounts! We do not deal with spamming!
We Accept